RIJSWIJK – Foreign Minister Jozias van Aartsen is furious about the release by Turkey of Hakan K., one of the people involved in the murder of Dutchwoman Marijke van Dijk and the rape of two of her friends in May 1995. “The Netherlands will take this up at a high level,” said Van Aartsen Friday.

Turkish authorities confirmed Friday morning that Hakan K., sentenced to life imprisonment, was freed on 23 May after serving just seven years in prison, based on last year’s amnesty act in Turkey. This act however only applies to prison sentences of up to 10 years. Dutch anger has been conveyed to Turkish authorities, said Van Aartsen, who also summoned the Turkish ambassador in the Netherlands.

K. and the three other men attacked and raped the 25-year-old Marijke and her friends Suzanne Kranenburg, 27, and Hanneke Sweep, 30, in May 1995 in the mountains near the Turkish beach town of Alanya. They stabbed Marijke to death and threw her in a gorge and left Suzanne and Hanneke with slit throats in a nearby gully, but these women survived.

Van Aartsen said the amnesty for Hakan K. “is not good for relations” between the Netherlands and Turkey. He will discuss the matter further with his Turkish opposite number Cem next week, when he accompanies Crown Prince Willem Alexander on his visit to Turkey.

Personal injury lawyer Yme Drost is considering launching civil proceedings against Hakan K. on behalf of the families. A damages procedure could also be launched against the other three involved if they are released early. Drost is taking this possibility into account, even though the amnesty act does not apply to any of the four men. 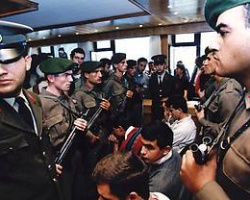 Hakan Karayavuz Back in Prison